When I landed in Boston, I felt a sense of nostalgia. I was born and raised in Richmond, Virginia, so I was far from home and childhood memories. Still, the changing color of the leaves from bold green to a spectrum of reds, burgundies, oranges, and yellows alongside the auburn brick buildings sent me right back to my East Coast beginnings.

This was my first time attending the Progressive Education Network (PEN) National Conference. I went with uncertainty as what to expect and anticipation because I would be presenting a workshop with two of my former colleagues. Unlike other conferences I have attended, PEN conference workshops were held around the city at various schools and community centers. This granted me the opportunity to see parts of Boston that I wouldn’t have had all of the workshops been held at one conference center. Attending workshops in classrooms contributed to an atmosphere of celebrating educators and also grounded me as I settled into what was being shared with me that session.

I took copious notes during each of the keynotes and workshops I attended and shared them with my school colleagues upon my return. And while there were many immediate takeaways, it wasn’t until I returned to my notes at the end of the fall semester, that I recognized an important thread: there is power in acknowledging and honoring culture, language, and lived experience. Upon further reflection, these key essential questions emerged.

What assumptions do we make about students’ potential and proficiency based on their ability to share their ideas in the manner we have been socialized to value as correct: standard-organized-structured and in fluent-English?

Deborah Meier, a former educator and acclaimed leader of the school reform movement in the US, was the opening keynote to the conference. She shared that students often come to school full of ideas and language to express it, but in the process of education, they quickly learn that their language and mode of expression is not welcome or valued in the classroom experience. By not honoring and acknowledging what students bring to the classroom (lived experience, richness in language and culture, raw creativity and sense of play) we diminish the capacity of the student and miss out on opportunities of growth and development as an institution.

Are educators engaged in identity work related to their own socialization and its influence on what they and their institutions value?

Sonia Nieto, an educator, researcher, and writer, who has devoted her life to questions of diversity, equity, and social justice in education, was the second keynote of that day. Sonia is a daughter of Puerto Rican parents who moved to NY in the 1930’s. She shared her polarizing experience of loving education since childhood, which prompted her to be a teacher, while also recognizing that school was the very place she learned that Spanish wasn’t valued as a language; she got the impression that her people didn’t contribute much to the world. As educators, we need to be more reflective on how we have been socialized and how that might undermine learning by reinforcing stereotypes and false narratives.

Who are we erasing in order to remain in a space of comfort? Who inaccurately dominates the narrative due to familiarity and our ability to relate? What messages are we sending when we do not put forth an effort to acknowledge and honor someone’s name?

I also attended a powerful and eye-opening workshop called Combating Islamophobia with Nassim Zerriffi, a teacher at Manhattan Country School. During a “Muslims in STEM” activity, a participant explained that she had not been sharing names that are “challenging to say” to her students because she didn’t want to disrespect them by mispronouncing them. Instead, she omitted them from her curriculum. This means that Muslim contributors to modern society weren’t getting credit, which allowed a false narrative to exist and a narrow and stereotypical narrative of Muslims to grow.

This erasure and stereotyping are of course not limited to the Muslim community. As a person with a non-Anglo-traditional name, I’m well aware of the stigma that exists around names, specifically as it relates to the Black/African-American community. The omission of names, which leads to the omission of perspective, cultures, and point of view, hit me hard because the impact doesn’t stop at cultural erasure. Choosing not to say a “challenging” name sends a message about which names are acceptable and valued. As Uzoamaka Aduba, Nigerian actress famous for her role as Crazy Eyes on Orange is the New Black, recounts, “I went home and asked my mother if I could be called Zoe. I remember she was cooking, and in her Nigerian accent she said, ‘Why?’ I said, ‘Nobody can pronounce it.’ Without missing a beat, she said, ‘If they can learn to say Tchaikovsky and Michelangelo and Dostoyevsky, they can learn to say Uzoamaka.’” As educators, we have the power to illuminate the lives of individuals who have been blotted out over time. By providing a more comprehensive picture of those who contribute to our fields of study, we assist in combating stereotypes and help students understand the true value in diverse educational communities.

I enjoy leaving conferences with as many questions as I do answers because it stimulates my curiosity and is a catalyst for continued learning. The PEN National Conference celebrated the educator just as much as it challenged educators to reflect on their calling, stay abreast of new findings in their field without getting rigid around best practices, and keep learning, every day in all ways. 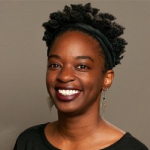 Tamisha Williams is the Dean of Adult Equity & Inclusion at Lick-Wilmerding High School in San Francisco, California. Prior to her current position, she served as the Director of Diversity Initiatives at Bosque School in Albuquerque, New Mexico for three years. She currently works with staff, faculty, administration, parents, and trustees in creating an integrated program to further the school’s commitment to diversity, equity, and inclusion. Tamisha is a member of the People of Color in Independent Schools (POCIS) board of directors where she helps to coordinate networking and professional development opportunities for Northern California Bay Area educators and school communities.